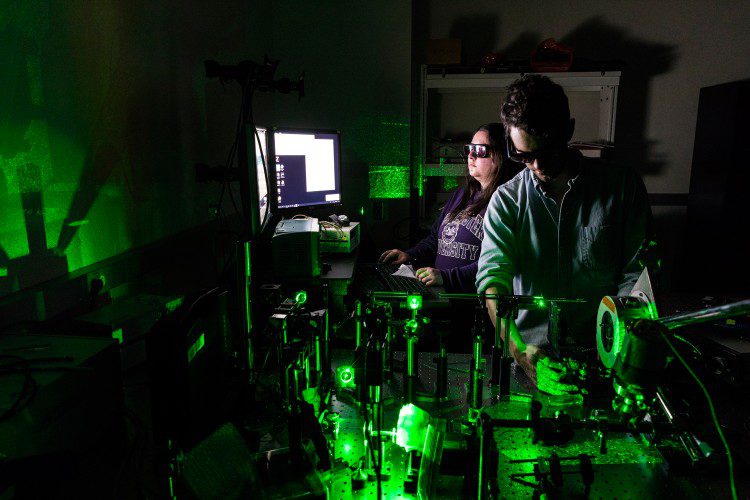 Scientists are excited about diamonds — not the types that adorn jewelry, but the microscopic variety that are less than the width of a human hair. These so-called “nanodiamonds” are made up almost entirely of carbon. But by introducing other elements into the nanodiamond’s crystal lattice — a method known as “doping” — researchers could produce traits useful in medical research, computation and beyond.

In a paper published May 3 in Science Advances, researchers at the University of Washington, the U.S. Naval Research Laboratory and the Pacific Northwest National Laboratoryannounced that they can use extremely high pressure and temperature to dope nanodiamonds. The team used this approach to dope nanodiamonds with silicon, causing the diamonds to glow a deep red — a property that would make them useful for cell and tissue imaging.

The team discovered that their method could also dope nanodiamonds with argon, a noble gas and nonreactive element related to helium found in balloons. Nanodiamonds doped with such elements could be applied to quantum information science — a rapidly expanding field that includes quantum communication and quantum computing.

“Our approach lets us intentionally dope other elements within diamond nanocrystals by carefully selecting the molecular starting materials used during their synthesis,” said corresponding author Peter Pauzauskie, a UW associate professor of materials science and engineering and researcher at the Pacific Northwest National Laboratory. 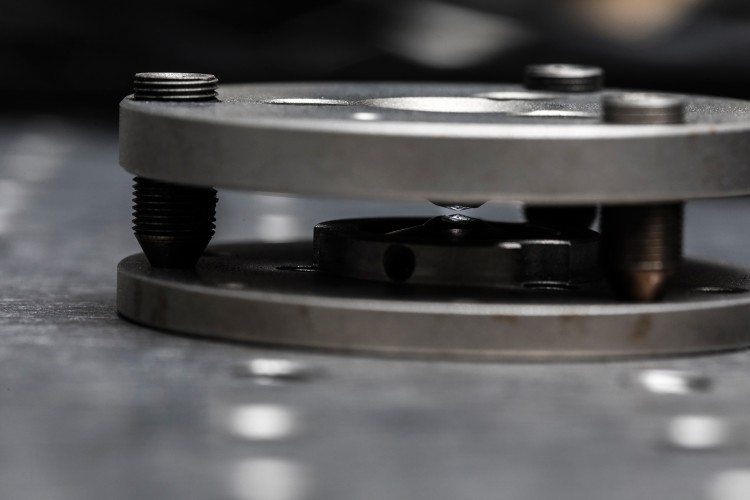 A side view of a diamond anvil cell, used to generate pressures above 15 gigapascals between the two synthetic diamonds that are visible near the center of the cell. Mark Stone/University of Washington

The team’s starting point for nanodiamonds was a carbon-rich material — similar to charcoal, said Pauzauskie — which the researchers spun into a lightweight, porous matrix known as an aerogel. They then doped the carbon aerogel with a silicon-containing molecule called tetraethyl orthosilicate, which was chemically integrated within the carbon aerogel. The researchers sealed the reactants within the gasket of a diamond anvil cell, which could generate pressures as high as 15 gigapascals inside the gasket. For reference, 1 gigapascal is roughly 10,000 atmospheres of pressure, or 10 times the pressure at the deepest part of the ocean. 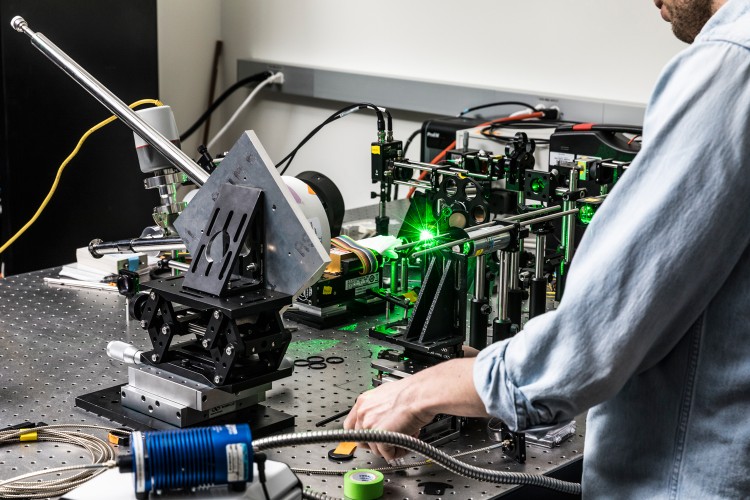 UW postdoctoral researcher Matthew Crane operates equipment that uses a laser to heat the gasket of a high-pressure diamond anvil cell above 3,100 F, more than one-third the temperature of the sun.Mark Stone/University of Washington

To prevent the aerogel from being crushed at such extreme pressures, they used argon, which becomes solid at 1.8 gigapascals, as a pressure medium. After loading the material to high pressure, the researchers used a laser to heat the cell above 3,100 F, more than one-third the surface temperature of the sun. In collaboration with E. James Davis, a UW professor emeritus of chemical engineering, they saw that at these temperatures the solid argon melts to form a supercritical fluid.

Through this process, the carbon aerogel was converted into nanodiamonds containing luminescent point defects formed from the silicon-based dopant molecules. The nanodiamonds emitted a deep-red light at a wavelength of about 740 nanometers, which is useful in medical imaging. Nanodiamonds doped with other elements could emit other colors.

“We can throw a dart at the periodic table and — so long as the element we hit is soluble in diamond — we could incorporate it deliberately into the nanodiamond using this method,” said Pauzauskie. “You could make a wide spectrum of nanodiamonds that emit different colors for imaging purposes. We may also be able to use this molecular doping approach to make more complex point defects with two or more different dopant atoms, including completely new defects that have not been created before.” 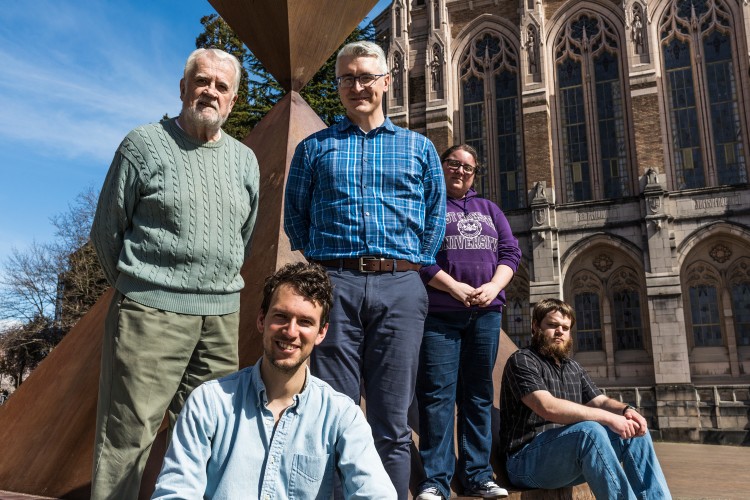 Surprisingly, the researchers discovered that their nanodiamonds also contained two other elements that they didn’t intend to introduce — the argon used as a pressure medium and nitrogen from the air. Just like the silicon that the researchers had intended to introduce, the nitrogen and argon atoms had been fully incorporated into the nanodiamond’s crystal structure.

This marks the first time scientists have used high-temperature, high-pressure assembly to introduce a noble gas element — argon — into a nanodiamond lattice structure. It is not easy to force nonreactive atoms to associate with other materials in a compound.

“This was serendipitous, a complete surprise,” said Pauzauskie. “But the fact that argon was incorporated into the nanodiamonds means that this method is potentially useful to create other point defects that have potential for use in quantum information science research.”

Researchers hope next to dope nanodiamonds intentionally with xenon, another noble gas, for possible use in fields such as quantum communications and quantum sensing.

Finally, the team’s method also could help solve a cosmic mystery: Nanodiamonds have been found in outer space, and something out there — such as supernovae or high-energy collisions — dopes them with noble gases. Though the methods developed by Pauzauskie and his team are for doping nanodiamonds here on Earth, their findings could help scientists learn which types of extraterrestrial events trigger cosmic doping far from home.

Lead author on the paper is Matthew Crane, a former doctoral student in Pauzauskie’s laboratory and now a postdoctoral researcher in the UW Department of Chemistry. Co-authors are former UW postdoctoral researcher Alessio Petrone, now at the University of Napoli Federico II in Italy; doctoral student Ryan Beck and professor Xiaosong Li in the UW Department of Chemistry; former Department of Materials Science & Engineering doctoral students Matthew Lim, now a postdoctoral researcher at Sandia National Laboratories, and Xuezhe Zhou, now a hardware system reliability engineer at Apple; and Rhonda Stroud, head of the Nanoscale Materials Section at the Naval Research Laboratory. The research was funded by the National Science Foundation, the University of Washington, the U.S. Office of Naval Research, the Microanalysis Society of America and the Pacific Northwest National Laboratory.