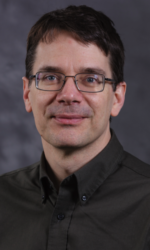 Eric Klavins, director of the UW Center for Synthetic Biology and professor of electrical and computer engineering, is interested in the programmability of biology – his lab designs gene circuits and cell-cell communication systems that enable novel behaviors in living organisms. Last summer, the Klavins lab joined the Institute for Nano-Engineered Systems and moved into the NanoES building.

When Klavins first arrived at UW in 2003 as a computer scientist and engineer, his research interests included stochastic processes, robotics, and self-assembly. However, over the ensuing years he became increasingly interested in biology and genetic engineering, which led him to study the folding patterns of DNA. Seeing living organisms as essentially naturally occurring computers, Klavins found an opportunity to combine his newfound interests with his passion for computer programming and shifted his research focus to synthetic biology. His transition was cemented in 2009 when he and his colleagues were awarded a grant from the National Science Foundation (NSF) to develop molecular computing systems within cells, including components mimicking logic gates, capacitors, resistors, and transistors. Since then, the scale of his lab’s research has grown to include organisms like bacteria, yeast, plants, hydra, and mammalian cells.

“Our research is really inspired by biology,” Klavins explains. “Life has evolved a toolbox of systems, from organs down to amino acids, but they’re difficult to fully understand and manipulate. If you take a random gene out of a plant and replace it with one from a whale, it probably won’t do anything; however, a transistor taken from a computer can work in a phone just fine. So, we want to create a toolbox of synthetic biological parts that are engineered to be understandable and reusable. With these tools, we can do things like turn on and off individual genes, send and receive signals to and from cells, and control the way proteins stick to each other.” 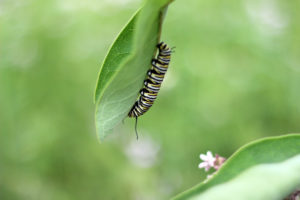 A recent publication from the Klavins lab describes a tool developed in close collaboration with UW biology professor Jennifer Nemhauser, that enables scientists to program hormone-responsive gene circuits in plants. This versatile tool can be used to manipulate a specific gene of interest, including those involved in plant growth, fruiting, pathogen response and more.

For example, Klavins’ team used this technology to engineer localized expression of a synthetic gene in response to tissue damage. Usually, in response to tissue damage by insects, plants release the hormone jasmonate, which triggers systemic effects causing the plant to slow down growth in favor of repairing the damage and ramping up production of defense molecules that repel insects. By intercepting that chemical message and reprogramming the plant’s response to it, Klavins and his collaborators hope to build tissue specific responses that could make plants more robust in crops. 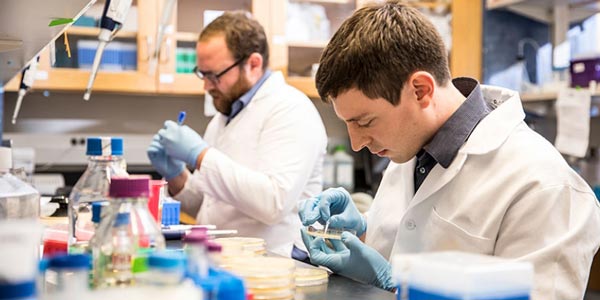 David Younger of A-Alpha Bio in the lab. Photo by Dennis Wise / University of Washington

Interactions between proteins are important in the development of many disease states and thus are attractive drug targets. The ability to characterize how a drug disrupts protein to protein interaction networks can provide a window into how the drug may ultimately function inside the body, allowing pharmaceutical companies to detect problematic drug candidates early on, before the start of a clinical trial.

Yeast has long been used to study interactions between individual proteins one-by-one; however, by reprogramming yeast to link protein interaction strength with mating efficiency and pairing barcodes with binding proteins, Younger can study thousands of distinct interactions simultaneously. A-Alpha Bio’s high-throughput technology will reduce the amount of time, money, and resources needed for screening drug candidates during drug development.

While Klavins maintains a pragmatic, process-based approach to his lab’s research, he has big dreams for the future of synthetic biology. “Imagine if you could build genetic circuits as robust and complex as electronic circuits. And imagine if they consisted of modular, reusable parts that allowed them to interact with any biomolecular signal in a body, a plant, or a microbe. Then we would be able to easily engineer complex gene therapies, new crops, and even designer soil. Genetic engineering would go from tweaking existing genetic systems, to a mature engineering field with safe, predictable, quantifiable results.”

The Klavins Lab maintains lab and office space on the third floor of the NanoES building, and additional lab space in the basement. They also partner and share instrumentation with the David Baker, Georg Seelig, and James Carothers labs.